6 Rare Watches You Can Only Buy Resale

The biggest upside of shopping watches in the resale market is, arguably, the possibility of unearthing something spectacular. One person’s consignment is another person’s treasure, and you never know what you’re going to stumble upon while scrolling through our site or perusing one of our stores. We have the unique luxury of receiving rare, out-of-production, hard-to-find watches on a regular basis, but more importantly we have highly skilled watch experts who truly understand their value. To the untrained eye, a limited edition Richard Mille or a tiger’s eye-accented Piaget may go unnoticed. To our horologists and experienced watch aficionados, however, they’re a sight to behold.

So what makes a rare watch rare, and which notable timepieces have shown up recently, just begging for a new wrist to grace? TRR Fine Jewelry & Watch Valuation Manager Kamilla Akbarova reveals six collection-worthy watches that deserve to be on your radar, discusses what makes them so coveted and provides a few choice authenticity tips for spotting the real deal. Read on to discover your next watch investment.

The Vacheron Constantin Patrimony Retrograde Day-Date seen here is no longer in production. While a newer version has taken its place, the re-release has also made it twice as difficult to find this particular model in the resale market. Vacheron Constantin launched the Patrimony collection in 2004, aiming to enter the superlative watch market with a new take on their existing timepieces. With a range of sizes from 36mm to 42.5mm, the collection was created to appeal to both men and women. This stunning 18K white gold Vacheron Constantin — Reference 86020000G-9508 / 86020/000G-9508 / X86G2699 — debuted at SIHH (Salon International de la Haute Horlogerie) in 2010.

This 1970s-era Piaget 9021 B11 Classic Watch features a manual movement and a tiger’s eye quartz dial. It’s as beautiful as it is functional, which is part of Piaget’s story; when brands like Omega and Rolex were dominating the sport watch market in the ’70s and ’80s, Piaget was specializing in dress and jewelry watches like the popular Polo.

Aside from the movement, every component of a Piaget watch is made of gold. The brand purchases tons of gold, as well as several thousands of carats of precious stones, every year to produce its watches. The tiger’s eye 9021 B11 Piaget watch is extremely difficult to find as it hasn’t been produced in years. When Georges-Édouard Piaget established a workshop on his family farm, he had a motto: “Always do better than necessary.” The 9021 B11 perfectly encapsulates Piaget’s philosophy.

Though one of the youngest luxury watch brands in the world, Richard Mille has established itself on the market with its one-of-a-kind timepieces. The RM 016 was introduced in 2007 with its distinguished skeleton dial, exhibition caseback and thin case. Only 15 of this particular style were created, making it a very exclusive timepiece. Before the Richard Mille team even begins production for particular RM 016 models, they dedicate 18-plus days and 400 hours to technical adjustments, design tweaks and research — an RM 016 case alone comprises 202 “separate machining operations.”

The easiest way to spot a Richard Mille limited edition model is to look at the font; limited edition watch fonts are usually stenciled out instead of filled, which can be seen on this Richard Mille RM 016. Some Richard Mille watches sell for hundreds of thousands of dollars at auction; notably a white gold and diamond RM 016 auctioned for over $100K in 2019, and a PVD-coated RM 016 sold for almost $62K. On TRR, other models have sold for upwards of $100K. Due to its limited production, the RM 016 is a trophy watch, and it’s sure to become even more coveted over time.

Richard Mille Authenticity Tip: One of the best ways to authenticate a Richard Mille watch is to feel the heft of the watch. Replicas use cheaper materials that weigh less than their authentic counterparts.

A close-up of the Richard Mille RM 016 watch, identifiable as a limited edition timepiece by its stenciled markers.

The Rolex Cherry Day-Date, Reference 118139, is a watch that has long appealed to collectors who love the hunt — especially since this model was discontinued in 2019. In the 1970s, Rolex released 36mm “Stella” Day-Dates — watches with bright dials in colors like pink, orange and green. The colors in the original collection were made from a lacquered, multi-layered enamel that was prone to cracking. In addition to this defect, the bold hues did not appeal to watch connoisseurs when they initially debuted, and Rolex ultimately stopped production.

In the 2000s, however, these vintage Stella Day-Dates experienced a mini-revival. The watches became extremely coveted, but the dial’s durability was less than adequate. Rolex decided to tap into this newfound interest and release an array of colorful Day-Dates in 2013. The new dials were made with hardened brass and in deeper colors, including Blue, Cognac, Chocolate, Green, Rhodium and Cherry. While most Day-Dates are equipped with a 3-link President bracelet, Rolex doubled down on color for this collection with leather and alligator straps to match the dials. Reference 118139, part of the 2013 re-release, features a white gold case, a burgundy alligator strap and a cherry red dial with the famous Day-Date complications. It’s a bold choice, but perfect for someone who wants a piece of the “Stella” craze.

Rolex Authenticity Tip: To help determine a Rolex’s authenticity, take a close look at the cyclops lens on the dial. On an authentic Rolex, the cyclops lens should magnify the date 2.5 times and should have a curved lens. On a counterfeit, the lens is usually flat and lacks magnification. 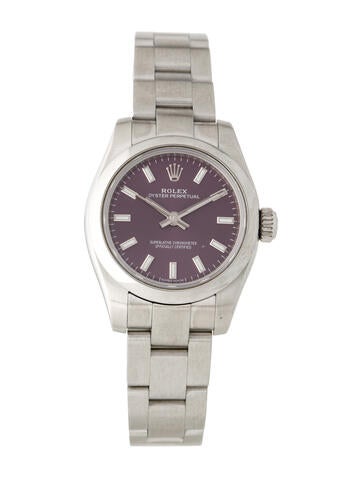 Reference 4700/530 is a quartz watch, a departure from Patek’s typical automatic Nautilus models. However, Patek Philippe takes pride in its high-precision watch movements and is one of the pioneer watchmakers exploring the potential for electronic timekeeping. The brand uses the same high-quality standards for both automatic and quartz movements.

The 4700 model was introduced in the 1980s but discontinued in 2006, making it a rare find on the resale market. With the collaboration branding front and center on the dial on the Patek Philippe x Tiffany & Co. Nautilus watch, it’s a special timepiece for both Patek Philippe and Tiffany & Co. enthusiasts.

Temari, Japanese for “hand ball,” is an art of binding kimono scraps to make a geometric ball. This practice was widely enjoyed by the Imperial Court, and inspired Hermès’ Arceau Temari high jewelry watch. This watch was diamond-set using a technique called “snow-setting.” The diamonds are set next to each other, regardless of diameter and without a predetermined plan. It takes hundreds of hours to produce.

The Hermès Arceau Temari watch was originally introduced as a limited release during BaselWorld 2014 and came in lapis lazuli, onyx, mother of pearl and opal. This Arceau Temari watch weaves diamonds and lapis lazuli together with its dial design, and holds 750 diamonds, totalling 2.4 carats. Due to its limited availability as well as intricate design, the value of this Hermès timepiece in the secondary market continues to stay high.

WFH Remix: How To Style Suiting With Streetwear

How To Spot A Real Rolex Datejust Watch

Diamonds, But Make It Everyday: A Guide For Fall