How to Spot a Real Hermès Constance

The Hermès Birkin may get its fair share of the spotlight, but the brand’s Constance possesses a certain je ne sais quoi that makes it a classic in its own right. The Constance owes its moniker and sleek lines to Catherine Chaillet, who designed the bag in 1959 and named it after her daughter, born on the same day as the first bag was finished. The bag’s dramatic H clasp and boxy frame have left an impression since the beginning, with notable icons like Jackie Kennedy claiming the Constance as their go-to handbag.

Since the stylish elite have embraced the bag wholeheartedly, fakes have proliferated throughout the fashion world. The Constance is a definitive piece for anyone’s collection, and is also one of those rare handbags with an ever-rising resale value. Since our experts know how to detect even the most convincing of counterfeits, we’re sharing our authenticity tips for Hermès lovers everywhere. Find out how to identify a real Constance with guidance from our experts.

When it comes to materials, Hermès uses only the finest high-quality skins for its selection of renowned, obsession-worthy bags. According to our experts, the Constance is traditionally crafted in box leather, although it is produced in several fabrications, including exotics. Crocodile and alligator are popular alternatives to the classic leather version.

The bags come in four sizes — the Micro, the Mini, the 24 cm and the Elan. The original Constance was 23 cm, a measurement that refers to the bag’s width. Constances should be lined in lambskin leather for an added touch of luxury, so check to make sure the lining does not have a fabric or faux-leather interior. Also note the looped strap, which you should be able to adjust to create a crossbody or double up for a short shoulder strap.

There’s no ignoring the Constance’s iconic H closure, prominently featured on the lower half of the bag. The Constance’s clasp, which serves as a brand logo, is both functional and eye-catching. According to our experts, the clasp hasn’t changed in design since its inception.

Many will realize that the well-known H belt buckle looks similar to the Constance clasp, but diehard Hermès fans know there are slight differences between the two. The Constance debuted before the H belt buckle, and according to our experts, you can differentiate the designs by examining the serifs. The Constance H should have serifs that only extend outward, whereas with the H buckle, the serifs should protrude inwards and outwards.

An obvious tell for a fake Constance is in the type of hardware used. Our experts note that the Constance’s clasp originally came in gold-plated brass, and it was the only hardware type for many decades. In recent years Hermès has introduced palladium-plated hardware, as well as enamel and lizard inlay.

A genuine Constance should also feature a thin plexi plate on the back of the clasp, affixed with flathead screws. And underneath the clasp, the horizontal bar should have “Hermès” marked on the underside discreetly in the corner.

The Constance is constructed with exposed exterior seams, so when inspecting the bag, check that the seams are not splitting at the bottom corners. When every seam is exposed, it typically shows any flaws in the construction, so our experts recommend looking for continuous stitch lines. There should be no uneven or doubled stitches. The wax casing should cover the bag’s edges but there should be no excess wax visible.

At the interior, the bag features a pocket with a diamond-shaped leather zipper pull. The Hermès zipper should never dangle, and should always stay parallel to the zipper teeth.

Beneath the Constance’s front flap lies the bag’s only identifiable brand marker. A Constance is marked “Hermès Paris / Made In France” in heat-stamped foil, which should match the hardware of the bag. If the text is too big, is not foiled or does not match the hardware, it’s a red flag. According to our experts, counterfeiters often make the stamp very large and obvious to emphasize the brand name, so check that the scale is appropriate.

A blind stamp should also be located in the bag’s interior, denoting the year and craftsman who created the bag. This blind-debossed code should be tucked away in the upper corner of the interior, close to the stitch line. 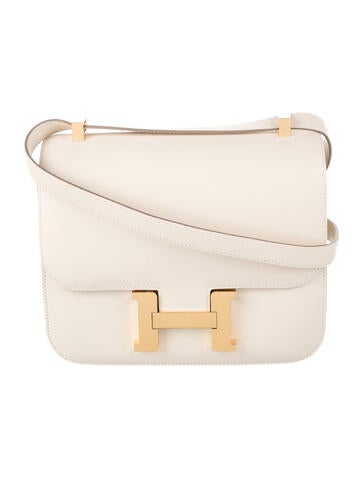 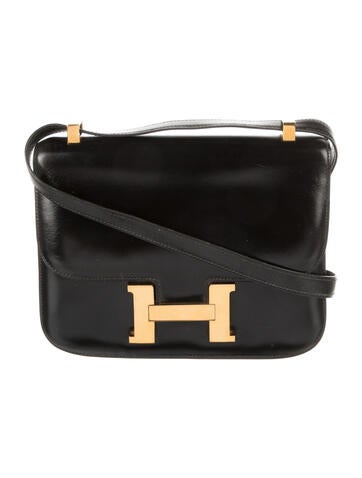 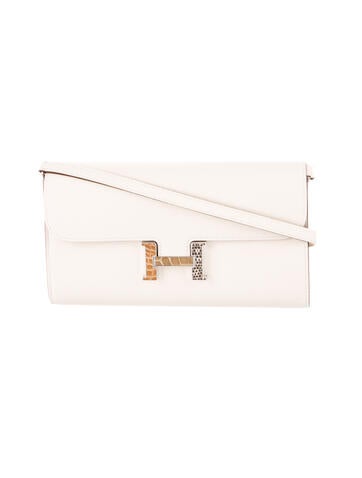