The very idea that there exists an Hermès bag that’s better than the Birkin may seem sacrilegious to some. The iconic padlock, that almost sculptural silhouette, those tight stitches, a mythic origin story… mon dieu, what could be better than the Birkin? An Hermès bag with a high profile and a higher price tag, the Birkin has been around since the ’80s and spawned waitlists since the ’90s (post-Sex and the City cameo). But the French house hosts an impressive roster of other styles. These Hermès bags may not be as famous, but when it comes to the brand’s fine materials, impeccable craftsmanship and attention to detail, there’s no doubt they’re on par with the Birkin (and Kelly, Evelyne and Constance, for that matter).

“Hermès creates impeccable handbags that are meant to stand the test of time and withstand everyday life,” notes Handbag & Fashion Valuation Manager Kiara Cooper. “Their handbags are works of art across the board. It’s the counterfeits you have to watch out for. The quality and construction of an authentic Hermès bag should always be masterful. Stitching should be clean, casing should be neat. The hardware and closures should always be sturdy.”

Don’t let Jane Birkin’s airplane mishap-turned-icon or Grace Kelly’s bag-shielded baby bump fool you into thinking the most well-known Hermès bags are the only Hermès bags worth considering. Read on as our expert Kiara Cooper gives a crash course on the bags that have been overlooked for far too long.

The Hermès Bag With An Edge

One look at the Hermès Roulis bag and it’s hard not to see the house’s definitive elegance with a rebellious twist. The Roulis’ prominent, abstract hardware riffs off of the iconic Chaîne d’Ancre motif and accents the bag like a choker — which is why it should come as no surprise that Jean Paul Gaultier, fashion’s own enfant terrible, was at the creative helm when the Roulis debuted in 2011. Anchored in history and Gaultier’s avant-garde aesthetic, the Roulis subtly reinterprets a house code that even the most dedicated Hermès lover may not detect.

“The Roulis is one of my favorite — dare I say absolute favorite — Hermès bags,” says Cooper. “It’s incredibly functional and is a good, understated alternative to the Constance. It also features a slip pocket at the back for ease of access to important items like a cardholder, papers, et cetera. It’s available in a multitude of leathers —  if you’d like an Hermès bag that gets softer with age, I recommend the Evercolor, a firm, matte leather.”

Hermès Roulis Bag Resale Value Tip: Mini bags are still in demand, and the Roulis’ resale value reflects this. “The Mini Sac Roulis 18 is currently the most coveted style, and has an average resale value of 76%,” adds Cooper.

How To Spot The Real Deal: “The Roulis bag’s shoulder strap is adjustable,” says Cooper, “but not completely detachable. Beware of Roulis bags that feature a fully detachable strap.”

It’s Better Than The Birkin If: You’re a die-hard fan of Chaîne d’Ancre, boxy crossbodies or the recently retired Jean Paul Gaultier.

The Hermès Bag That Travels Well

While Hermès’ heritage started from humble equestrian beginnings, the house has also done its part to perfect the art of travel. Enter the Bolide bag, a globetrotting companion immortalized in the history books for one noteworthy novelty. “The Bolide is the first bag to feature a zip closure,” explains Cooper. It’s not just the first Hermès bag outfitted with a zipper, but the first bag ever outfitted with a zipper. “In the 1910s, Émile Hermès traveled to North America, toured the Ford factory and spotted the zipper on a car’s canvas roof.” He filed a patent for the zipper and in 1923, the sac pour l’auto was born.

“The sac pour l’auto was originally designed for storing your valuables during travel, and was shaped to be easily placed in the trunk of a car,” notes Cooper. “In the ’80s, it was converted into a women’s handbag and christened the Bolide. The Bolide was smaller in size and meant to be carried by hand. With its structured dome shape and functionality-first design, this Hermès bag is an underrated classic. Recent styles include a detachable shoulder strap to allow for multiple carrying options.”

Hermès Bolide Bag Resale Value Tip: “The Bolide 31 in Clemence leather is the most commonly sought-after style, most likely due to the durability and reliability of the Clemence leather itself,” explains Cooper. “However, in line with the mini bag trend, the Mini Bolide 1923 is very popular in the resale market and holds up to 73% of its resale value when in excellent condition.”

How To Spot The Real Deal: “Make sure there is a good amount of tension when opening and closing the Hermès Bolide bag’s lock,” says Cooper. “Also pay attention to the engravings of the logo and number assigned to the lock and keys — they should be neatly etched into the hardware. When inspecting these bags, we usually use a loupe to get a better look at the details. Use a magnifying glass if possible to inspect the lock and keys on your Hermès bag.”

It’s Better Than The Birkin If: You’re a jetsetter who really needs to get a handle on things.

The Hermès Bag That Proves Less Is More 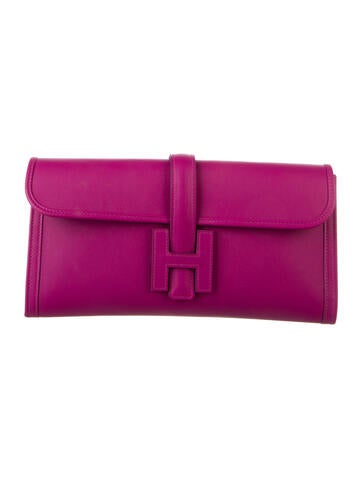 While Bottega Veneta’s The Pouch clutch seems to be the current It bag du jour, the Jige bag has long been an under-the-radar Hermès staple. The Jige clutch was designed in 1975 by former Hermès owner Jean Guerrand and gifted to a future daughter-in-law for her wedding. The present forever associated the clutch with commitment. “The Jige takes its name from Jean Guerrand’s initials, J.G.,” says Cooper, “and it’s also a celebrity favorite, spotted on the likes of Olivia Palermo, Kendall Jenner and Kim Kardashian.”

The minimal clutch is evocative of an envelope, with a tab closure that fits seamlessly into the H logo and an exterior pocket. “The Jige exists in PM, GM and mini sizes and as a wallet,” notes Cooper, “and more recent styles include the Jige Elan 29cm and 35cm.”

Hermès Jige Bag Resale Value Tip: Keeping your Hermès bag in top condition can pay off — the Jige Elan 29 retains up to 73% of its original price in the resale market.

How To Spot The Real Deal: “Recent styles of the Jige will be lined with leather, but don’t be alarmed if this Hermès bag has a Toile H interior lining,” notes Cooper. “Since this clutch has been around for decades, Hermès has created several variations of the bag.”

It’s Better Than The Birkin If: You’re a proclaimed Philophile who wants to dip their toes in the logo lover’s pool, but keep it minimalist.

The Hermès Bag That Really Moves

If you’re looking for a bag that can bend, twist and swing with the best of them, look to the Lindy. This coveted Hermès bag was inspired by dance, and takes its name from the Lindy Hop, a Harlem-born form that fused together the Charleston, jazz and tap dancing, among other styles. “The Lindy bag debuted in the Spring/Summer 2007 collection, and was another hit designed during Jean Paul Gaultier’s reign at Hermès,” notes Cooper. “Its silhouette is truly unique since it folds in the middle, slightly condensing when it’s carried by hand.”

Like many Hermès bags, the Lindy comes in a variety of sizes, leathers and colors. “The Lindy is available in a mini size, 26cm, 30cm, 34cm and 45cm, with the 45cm version typically being used as a travel bag,” notes Cooper. “The Lindy 26 is preferable for those in search of a classic to carry the essentials, and is smaller and lighter than the Lindy 30 and Lindy 34.”

Hermès Lindy Bag Resale Value Tip: “The Mini Lindy is rare and there are very few on the market,” notes Kiara. “This means some Mini Lindy bags are able to sell for up to 64% above retail.”

It’s Better Than The Birkin If: You’re a dancer at heart who needs a flexible, chic partner to tango with.

The Hermès Bag That Marries Past, Present & Future

The allure of the future is undeniable. It holds the promise of possibility. The notion of what was to come inspired the Hermès 2002 bag, which debuted in 1972, and with its rounded retro-futuristic H logo and clean lines, it feels like a bag outside of time. It looks forward, is inherently indicative of the past and yet feels completely of-the-moment.

“The Hermès 2002 bag was re-released for the Resort 2018 collection under current designer Nadège Vanhee-Cybulski, and is reminiscent of popular shoulder bags from the ’70s when it was first created,” notes Cooper. “It features two interior compartments and one interior pocket with a zip closure, which allows you to keep things organized. It also includes an exterior pocket to keep certain items a bit more accessible.”

Hermès 2002 Bag Resale Value Tip: “The 2002 is available in two sizes — the 20 and the 26,” states Cooper. “In contrast to the popularity of the aforementioned smaller Hermès bags, the larger 2002 26 is more desirable, and holds up to 70% of its value in the resale market.”

How To Spot The Real Deal: “The flap should fit comfortably around the curves of the H logo of the hardware, giving enough space to limit scuffing,” explains Cooper. “You should not struggle to align the flap and closure.”

It’s Better Than The Birkin If: You’re up for a little time-travelling (but make it fashion).

Pop Quiz: Which Hermès Bag Are You?

Birkins, Zumis & Beyond: 8 Iconic Handbags and Their Muses

Same Same but Different: Why Does Every New It Bag Look Alike?