Royal Oak Roots: How To Tell If Your Audemars Piguet Watch Is Real

The year was 1970, and esteemed Swiss watch brand Audemars Piguet was struggling. Though Audemars Piguet had been producing exquisite watches since 1875 in the majestic Vallée de Joux, battery-powered quartz watches were drawing interest. Mechanical watch sales were plummeting. It was an intense time of horological upheaval, and the tide seemed to have turned on Audemars Piguet’s traditional timepieces.

Georges Golay, Audemars Piguet’s managing director at the time, needed a miracle. Golay phoned Genevan watch designer Gérald Genta — who had already been collaborating with Audemars Piguet for twenty years — to craft something different. Basel Fair — the watchmaking event of the year — was coming up soon, and Golay was looking for a game-changing luxury sports watch. It had to be waterproof, it had to be steel and it had to be revolutionary. The clincher? Genta had less than twenty-four hours to design it.

The result of Genta’s genius effort was the Audemars Piguet Royal Oak. Inspired by a deep-sea diver’s helmet, the Royal Oak was considered avant-garde and completely original. It featured an octagonal bezel with eight exposed hexagonal screws, an intricate “tapiserrie” guilloché dial and an effortless bracelet. There’s a story behind the moniker as well: in the seventeenth century, King Charles II was fleeing Oliver Cromwell and hid within an oak tree, which effectively saved his life. The “Royal Oak” became a powerful political English symbol and gave its name to a number of British naval ships over the next one hundred plus years. The watch’s porthole-like bezel was reminiscent of a naval ship, and the name also conveyed a level of “royal prestige and longevity” that Audemars Piguet appreciated. In 1972, two years after Genta designed the Royal Oak, it debuted on the market and ultimately became the icon Golay had always hoped it would be.

Many of the “make it or break it” details that determine the authenticity of an Audemars Piguet Royal Oak can be found on the dial. “The Audemars Piguet Royal Oak has one of the most distinctive dial designs throughout the watch industry,” says Avizov. When inspecting a Royal Oak, Avizov first checks the dial for the correct tapisserie pattern design. It takes Audemars Piguet’s in-house experts approximately seven hours to create the dial, including the tapisserie motif. Note, however, that particular models like the Royal Oak Offshore Diver may not include the tapissere accent.

The tapisserie design is made with Audemars Piguet’s own guilloché technique, which uses pantograph machines and an engine-turning process to mechanically engrave the metal. “Their technique is incredibly distinctive,” says Avizov. “An engraving tool carves throughout the brass dial, spiraling inward while crafting their tapisserie pattern. However, this inward spiraling is not just a circular engraving. The tapisserie on authentic Audemars Piguet Royal Oaks should feature interconnected, concentric patterns that can be seen with careful examination. I haven’t encountered any counterfeit that is able to replicate this unique pattern.”

Next, Avizov considers the text and all of the markings that grace the dial. “Are the various fonts to brand specification?” asks Avizov. The Audemars Piguet branding, numerals and “Swiss Made” text can all help indicate if your model is real or faux. Some counterfeit models feature the Audemars Piguet branding in a bolder font with thin numerals that are narrower than the numerals on an authentic Royal Oak. The letters of the “Swiss Made” text should appear to be crisp and wide, but above all the text throughout should be in the correct fonts.

The AP logo is not included on the dial of all Royal Oaks, but if it is included on yours, give it a close look. “When the AP logo is included, the edges should be flat, not rounded,” says Avizov. “All of the markings on the dial should align with Audemars Piguet’s particular brand specifications as well. I consider all of the details — have the indices been polished with beveled edges? Are the hands the correct dimensions?” On counterfeit versions, Avizov has seen minute track indices that are too thick and that do not align with the edge of the dial. Watches that include chronograph complications and other functions with subdials should include seconds hands with the correct length; they should not be too long or extend past the edge of the subdial. 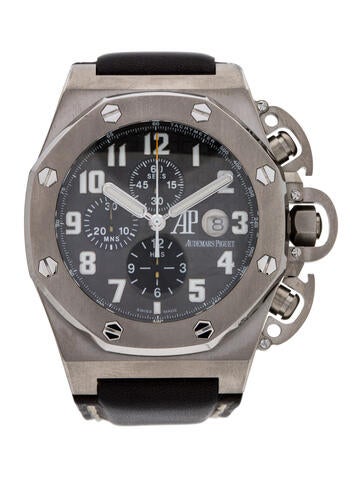 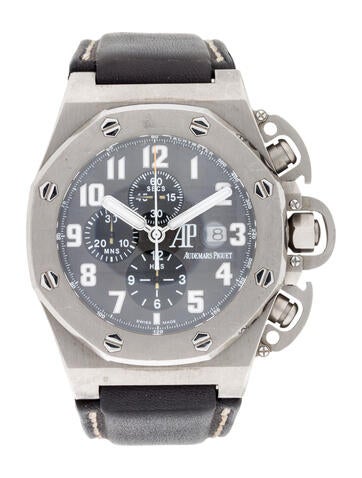 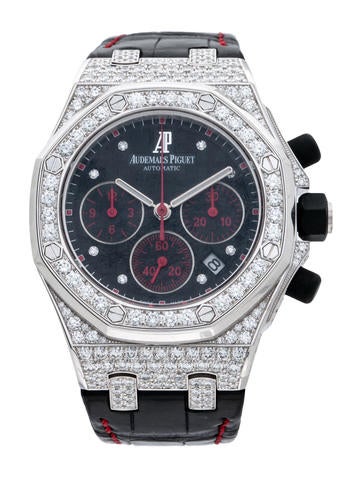 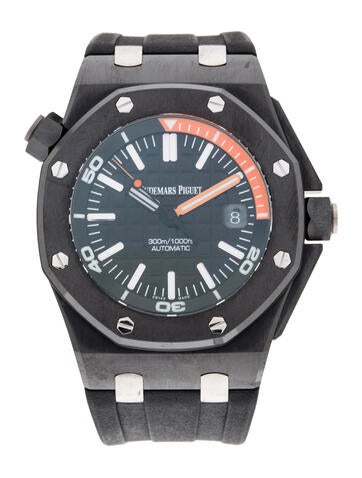 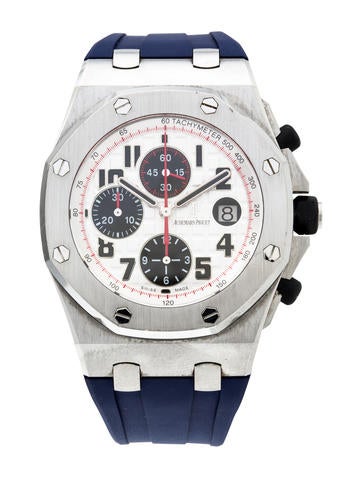 Audemars Piguet has been perfecting their brand standards for decades, so construction and craftsmanship are key elements to consider when checking for authenticity. “Audemars Piguet is very deliberate and precise with watch construction and assembly,” notes Kelsey Hickox. “On stainless steel models, the brand uses a polishing technique known as straight graining, in which an abrasive is rubbed onto the metal to achieve a linear finish. Today, Audemars Piguet offers the Royal Oak in a variety of metal types and combinations such as 18K rose and yellow gold, steel/gold combination, platinum, ceramic and titanium.”

“I always check to see if the polishing technique is properly executed on a Royal Oak,” explains Avizov. “Before installation of the movement and assembly of the watch, both case and bracelet must be constructed and polished. Most brands have the polishing part of the manufacturing process completely automated, with only assembly of these parts being performed by hand.” However, Audemars Piguet is not one of those brands. “The aforementioned straight graining technique is accomplished by hand. Each link of a Royal Oak’s bracelet is hand-polished before being assembled into a bracelet. The polish machines that most replicas use do not appear to be able to duplicate the striking finish found on an authentic Audemars Piguet watch. Many counterfeits miss this attention to detail, specifically on the edges of bracelets, as most of the processes are not completed by hand for that type of mass production.”

While many Royal Oaks boast straps made of leather, alligator and other exotic materials, the original design included a metal bracelet. “If your Royal Oak has a metal bracelet, verify that the edge of the links do not exhibit poor craftsmanship, and make sure there is no outline of driving pins on the edges of the links,” says Avizov. “The polishing technique should also match the case, and the clasp assembly and locking mechanism should correctly exhibit complexity in construction.”

The eight hexagonal screws on an Audemars Piguet Royal Oak Offshore Diver Chronograph Watch should always be made of white gold, even on steel models.

Beyond the iconic tapisserie-accented dial and top-notch polishing is the Royal Oak’s crown and bezel. “When authenticating an Audemars Piguet Royal Oak, I confirm that the crown size and shape corresponds to brand specification,” notes Avizov. Many crowns will be hexagonal with a rounded tip that’s topped off with an engraved AP logo.

The notable porthole-like bezel is also a finely honed aspect of an Audemars Piguet Royal Oak. When inspecting an AP timepiece, Avizov asks himself, “Are the hex screws within the bezel recessed and shaped correctly? Is the bezel beveled to brand specification?” The octagonal bezel on an authentic Audemars Piguet Royal Oak should include eight perfectly hexagonal bezel screws. But that’s not all. “The screws set within the bezel should be crafted from white gold, even on the steel models,” adds Hickox. “Counterfeiters often overlook this detail.”

Royal Oak watches are made with both closed and exhibition casebacks; either can be extremely telling when it comes to authenticity. “There are often inconsistencies to be found on replica casebacks when compared to legitimate timepieces,” says Avizov. “Most of the time, replica watches do not have the correct reference and serial numbers engraved on the casebacks. In 1972, Audemars Piguet started adding a letter to their serial numbers. For some early models, this letter is on the interior of the caseback. Counterfeit watches often use the incorrect font and engraving method for the numbers on their casebacks. Modern casebacks on authentic Royal Oaks should have an individual watch reference number, which will differ from both the serial number and the general model reference number.”

Exhibition casebacks reveal a watch’s inner workings, and being able to see a watch’s movement provides greater insight to those with a trained eye. “For watches with exhibition casebacks, both poorly made and high-quality replica movements can be found,” warns Avizov. “However, almost no effort is needed to deduce that the poorly made replica is inauthentic. All that’s needed is a cursory examination of the substandard polishing techniques, or lack thereof, as well as an inspection of imperfect stamping of the crest on the automatic rotor.”

For counterfeit watches with a higher-quality movement, however, things can get tricky. “These can be nearly identical to authentic Audemars Piguet timepieces’ movements,” notes Avizov. “The type of polishing used on the bridges and gears, as well as the design of the escapement and balance wheel assembly, are the most important clues that assist in distinguishing real from replica.” 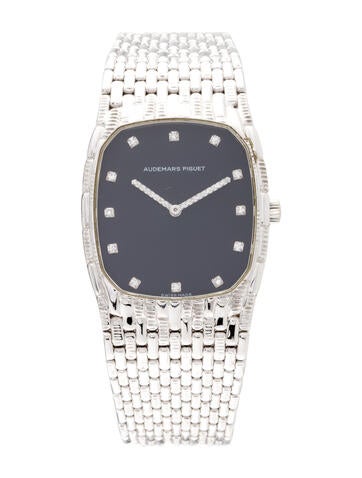 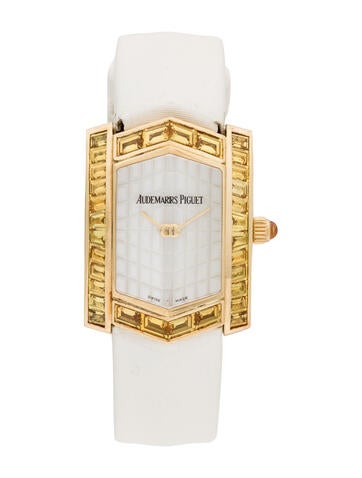 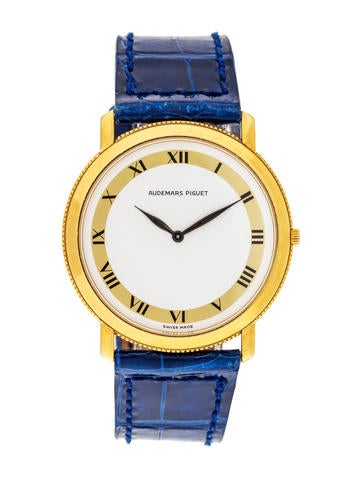 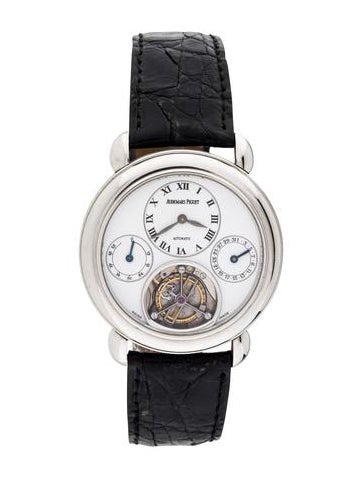 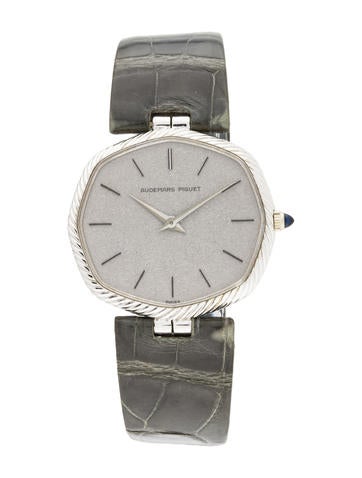 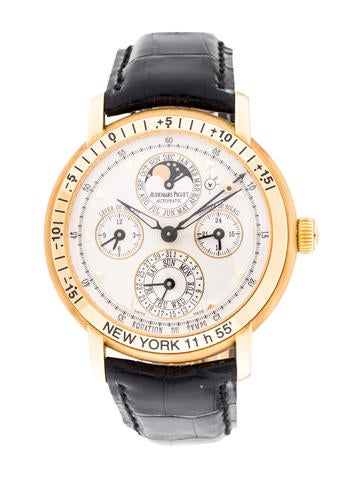 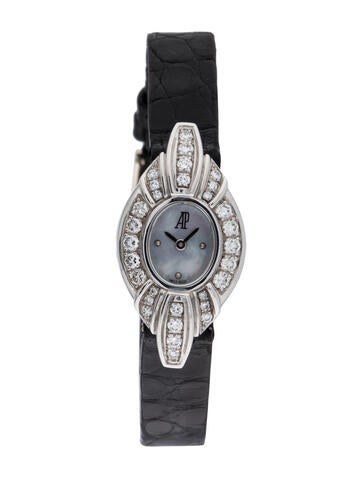 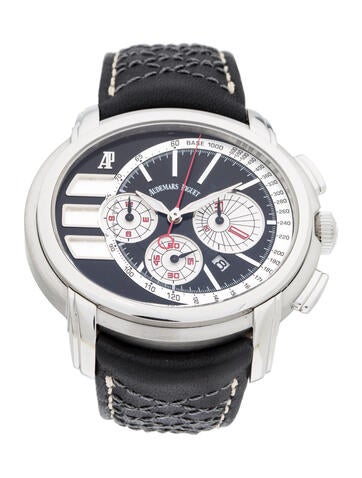 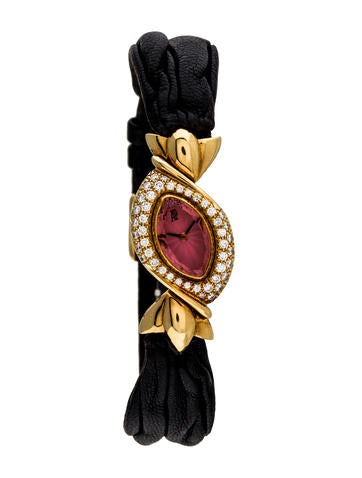 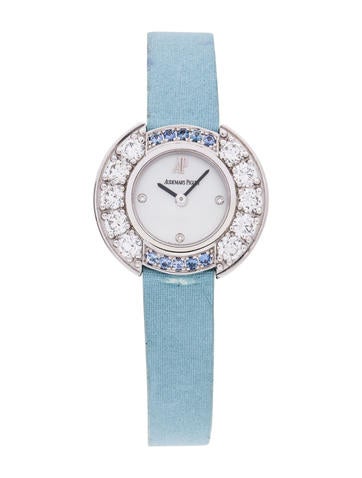 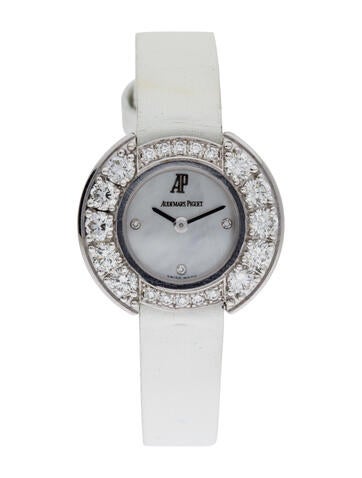 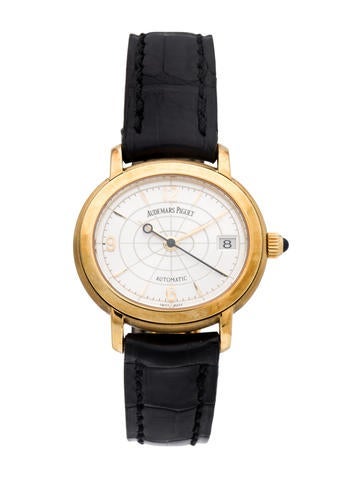 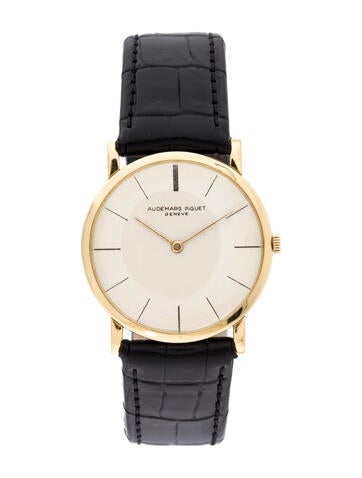 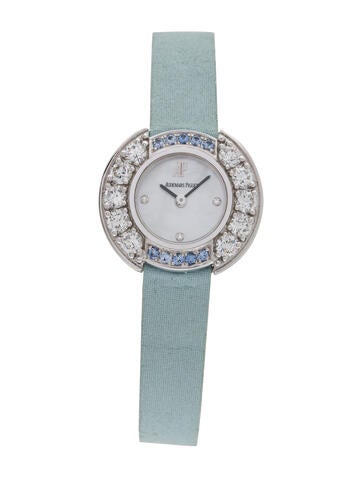 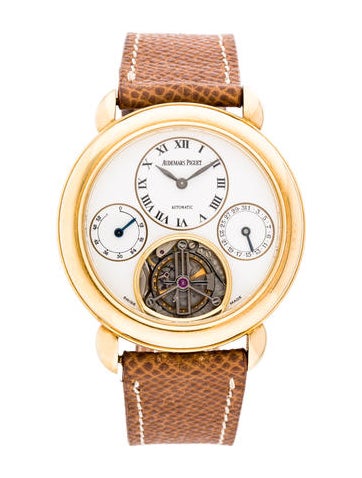 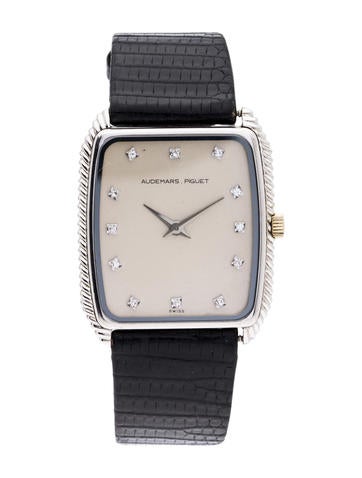 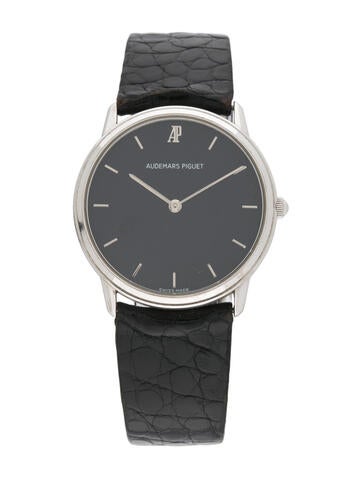 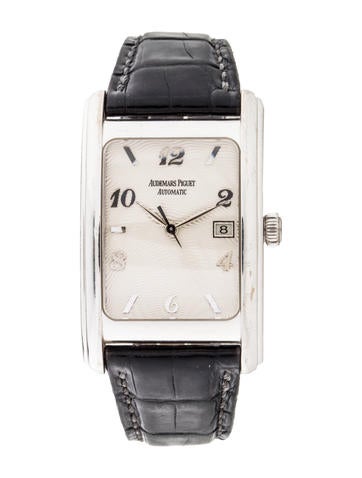 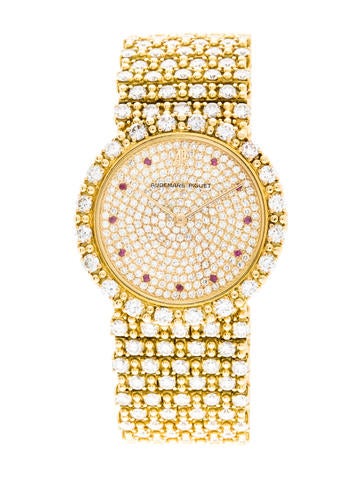 How To Spot A Real IWC Watch

Let Mister Mort School You In The Way of Technical Gear