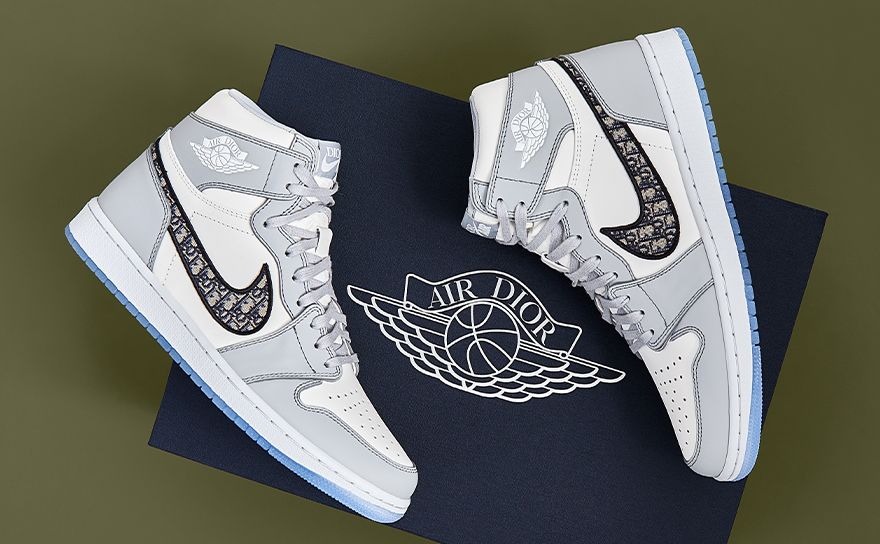 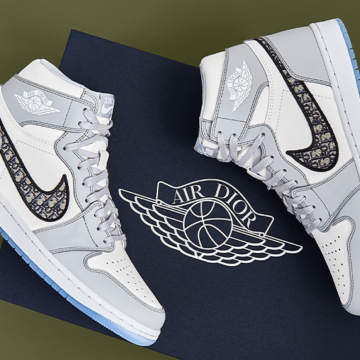 Air Dior Jordan 1s: How To Spot The Real Deal

Years ago, before the Air Dior Jordan 1s hit everyone’s feed by way of Travis Scott, there were rumors. In 2017, Kris Van Assche, then Dior Men’s creative director, posted an image of the Dior logo in the Nike font sitting atop a Swoosh. The caption? “JUST DO DIOR.” Van Assche quickly deleted the photo, but it was too late: whispers on the internet about a potential collaboration abounded, and continued.

When Kim Jones succeeded Van Assche in March 2018, he turned to the archives of the heritage brand, reinvigorating Dior Men classics and embracing art, streetwear and haute couture. Since his appointment, Jones has teamed up with artists such as Hajime Sorayama and Raymond Pettibon, as well as cultural icons like Sean Stüssy and KAWS. Seasons came and went, but no Air Dior Jordan. Then, at the end of 2019, luxury lovers’ and sneakerheads’ long-standing dreams were finally realized. Rapper Travis Scott teased a sneak peek of the shoes on Instagram, the Dior Oblique print cascading down an oversized Swoosh. The Air Dior Jordan 1s made their official debut on Dior Men’s Miami Pre-Fall 2020 runway, honoring the Jordan 1’s 35th anniversary in tandem.

The collaboration includes 1980s American sportswear-inspired clothing, leather bags, wallets and accessories, but the star of the show is, of course, the sneaker. “The Air Dior Jordan is truly one-of-a-kind, as a fashion house has never collaborated with Jordan before,” says The RealReal Streetwear & Sneaker Valuation Manager Carlos Santos. “The sneakers are made with genuine Italian leather in Italy, and there are 8,500 pairs each of the low and high models.”

Though the release of the Air Dior Jordan was delayed due to COVID-19, select Dior clients were afforded the luxury of reserving their pairs, while the general public could visit pop-ups and participate in a raffle to buy them. More than 5 million people entered. “Any time there is such an exclusive sneaker like this, delay or not, people will do anything to get their hands on a pair,” says Santos. The hype is still real, and unfortunately counterfeit versions began to emerge in the secondary market even before the shoe was available. Luckily, Santos has gotten up close and personal with the genuine article and knows what to look for. Read on for his expert tips on spotting the real deal. 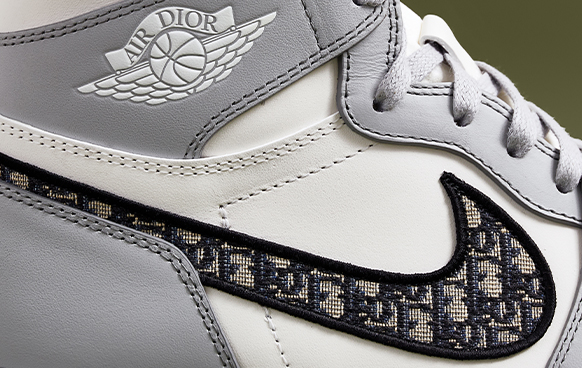 That coveted Nike Swoosh — one of the most identifiable branding aspects of a Jordan sneaker —  can also tell you a lot about the Air Dior Jordan’s authenticity. “The Swoosh is a crucial component to consider when authenticating a pair of these,” says Santos. “The Air Dior Jordan’s Swoosh is larger than a typical Jordan’s. It also provides more real estate for the Oblique print. As time has gone on since the release, more and more faux pairs have started to hit the market, with many differences amongst them. Some counterfeits create a Swoosh with an Oblique print that is too large or too small, while others are just sloppy in terms of detail.” The materials and craftsmanship are on full display at the shoe’s exterior. “Big callouts when determining real from faux are the high quality of the Italian leather and the precision of the stitching,” Santos adds. “Poor-quality leather and inconsistent stitching should be instant red flags.”

Pay close attention to the wings logo at the collar as well. “The wings logo should say ‘Air Dior,’ as opposed to the normal ‘Air Jordan,’” notes Santos. “On a normal pair of Jordan 1s, the leg of the Jordan’s ‘R’ and the bottom of the ‘D’ should touch slightly. Since ‘Jordan’ isn’t present on the Air Dior shoes, the best thing to look at is the quality of the embossing and the spacing between the basketball and wing lines. There should be uniform spacing between them; oftentimes faux pairs will have lines that are too close together.” 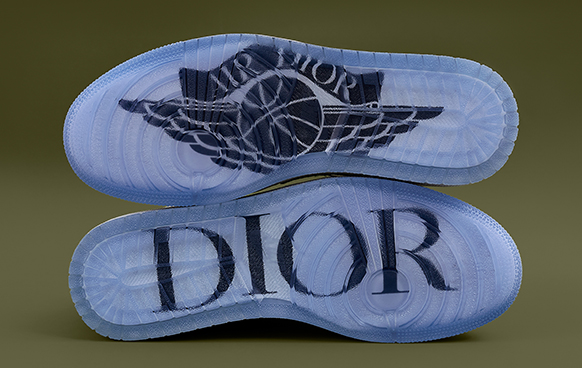 The Air Dior Jordans are outfitted with translucent outsoles. Beneath them, the Air Dior and Dior logos should be visible. “When it comes to the outsoles of the Air Dior Jordans, the biggest tell is the hue of the blue,” says Santos. “The color should be a little muted. It should not be a harsh, incredibly saturated blue. The outsole shouldn’t be too clear either. The translucence will fade and become slightly yellow over time, so the soles’ hue should not be the only area you check for authenticity.” Inside the Air Dior Jordans should be a white removable insole, debossed with the Dior Oblique print (above, right). “Make sure the insoles are not flimsy,” notes Santos. “Similar to any other Dior product, craftsmanship and quality are the top priority. You should be able to see this on the detailing of the insole.” Below the removable insole, there should also be a debossed leather sole with a “strobe” Dior Oblique print (above, left). The Air Dior Jordans’ tongue should be a jacquard material, with a subtle Dior Oblique pattern just visible on the exterior. “The Oblique tongue is arguably my favorite detail on the sneaker,” says Santos. “It’s also another key area to inspect when authenticating. The print should not be too large, and the quality of the stitching should be top of the line. The details on the tongue should be impeccable.” There should also be a branded Dior Air tag at the top of the tongue, wrapping around from one side to the other. “The embroidery on the tag should be clean, and the ‘R’ in Dior should connect to the Swoosh just above the ‘A’ in AIR,” explains Santos. “On authentic pairs, the letters here should be easily legible.” 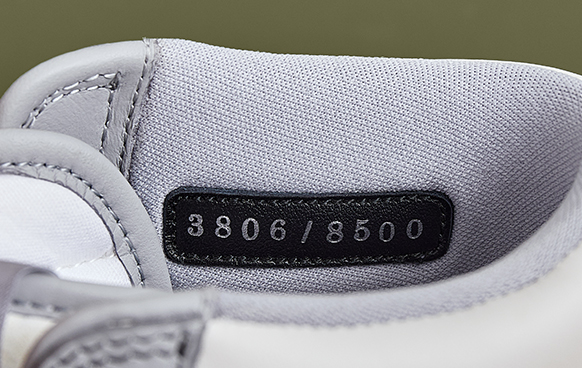 At the interior of the Air Dior Jordan’s collar should be a stamped number indicating the edition number out of 8,500. “The number edition stamp should be clean, and the numbers should not be too spaced out,” says Santos. “Some counterfeiters often space the numbers very far apart, with messy silver foil stamping that seems very poorly applied. The foil stamping on authentic pairs should be crisp.” 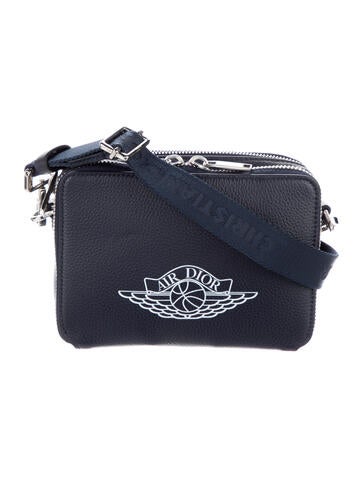 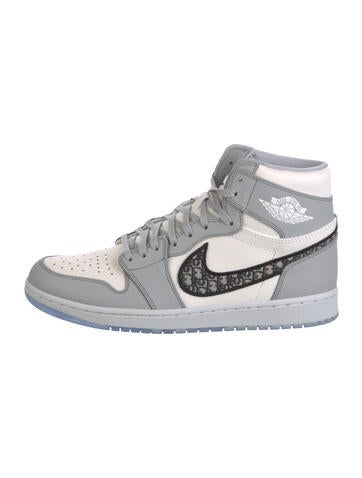 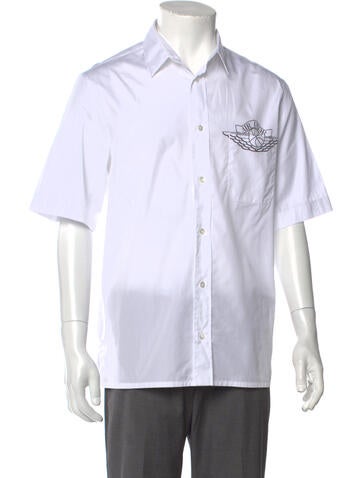 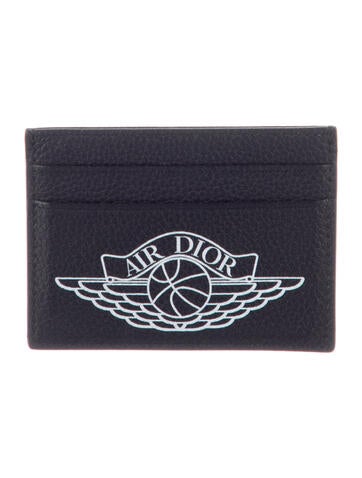 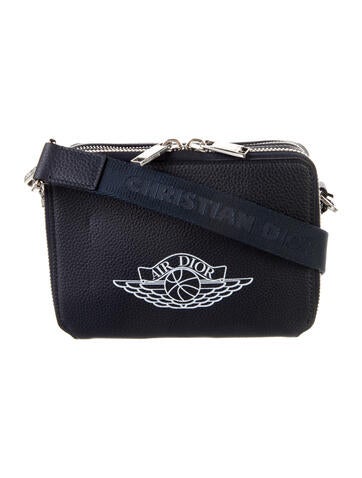 Our Chicago Store Is Open & It’s Our Biggest Yet