How To Spot A Real Cartier Tank Watch

The Cartier Tank watch has remained a classic for good reason. The unisex, understated timepiece — with its expert craftsmanship, clean lines and effortless design — is the embodiment of modernity, a far cry from the ornamentation and sweeping, organic shapes of the late-19th century Art Nouveau aesthetic. Designed in the early 1900s by Louis Cartier, grandson of founder Louis-François Cartier, the Cartier Tank watch officially hit the market in 1919 and became an instant icon.

The boxy case of the Cartier Tank watch was inspired by a tank’s cockpit and treads, a haunting reminder of WWI’s lasting effects. Louis Cartier transformed the Tank watch into a beacon of luxury, forever making horological history. It’s been worn by everyone from Andy Warhol, Jackie O and Princess Diana to Kim Kardashian, Sofia Coppola and Angelina Jolie. “Cartier is producing some of the best timepieces in the business for over a hundred years now,” says Senior Fine Jewelry & Watches Manager Katie Ward. “Including what I think of as their most recognizable and most legibly luxurious product, the Cartier Tank watch. I think it’s one of the most recognizable pieces a person can wear — I have a crush.”

But of course, like all great things, the Cartier Tank watch has been copied and counterfeited, and there’s nothing less luxe than discovering your Cartier watch is a faux. “Whether we’re authenticating a Cartier Love bracelet, or a Tank watch, the same basic principles apply,” explains Ward. “We want to check the materials, the design, and the craftsmanship. Hallmarks, signatures and stamps should all line up with the hallmark conventions of the moment that we believe it to be produced to confirm that.” Read on as Karin Dickinson, our resident Horologist, elaborates and shares her in-depth tips for spotting the real deal when it comes to the Cartier Tank watch. 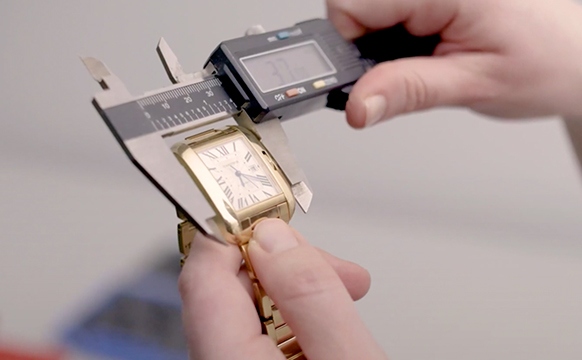 What elements of craftsmanship do you expect to see on an authentic Cartier Tank watch?
I look for high-quality finishing of the case, dial and movement. All edges on a genuine Cartier case should be smooth to the touch with no sharpness or metal burs. The dial should be laid out cleanly and clearly (no blobs of paint where there shouldn’t be and no jagged lines). I also look for the Cartier “secret signature” on the watch dial. If you inspect the markers closely, one will have “Cartier” written out in very small text within a Roman numeral. Cartier will usually include these in the 10 o’clock and 7 o’clock markers. It varies from model to model which number they hide it in, but it’s almost always there.

Next, we verify that the crown cabochon fits correctly, has no wiggle room around the diameter of the stone and is made from the correct stone — sapphire for all 18k models and spinel for two-tone.

Cartier also does high-end finishing of their movements — i.e. the watch’s inner mechanisms — even on watches without transparent exhibition casebacks. When looking at the movements, I expect to see clear engraving of the logo, caliber, et cetera on authentic pieces. I also look for specific finishing techniques on the movement itself, things not visible on the watch’s exterior: Geneva stripes, fine perlage and anglage. Geneva stripes are an entirely decorative pattern consisting of line patterns. Fine perlage consists of circular or linear patterns on the metal, and anglage is a beveled, usually high-polish finishing to the edges of the mainplate and bridges. Often all three of these patterns are present in an authentic Cartier watch, though sometimes it’s only two of the three. If a genuine Cartier Tank has diamond accents, what should they look like?
If a Cartier Tank watch has diamond markers, the settings should be clean, and the diamonds should all have the same cut, with the same diameter, consistent clarity and color. This is something a lot of counterfeiters get wrong, because they usually aren’t diamond experts. There was a period from the 1980s through the 1990s where external stones were of slightly lower clarity and color ratings; these diamonds should be either colorless or nearly colorless and may feature small inclusions or blemishes within the diamond. Anything from the year 2000 onward should be very high quality as far as the stone and craftsmanship goes. The same goes with diamonds on the case for modern models.

What hallmarks and details does Cartier use for Tank watches, and what do counterfeits often get wrong?
A genuine Cartier Tank watch should include the Cartier logo and a serial number consisting of two letters and a numeric code. You should also see the case material and metal hallmarks, though sometimes these will not be listed. Most often we see models in steel, 18k gold and steel, and exclusively 18k gold, though Cartier does use platinum for select models. Authentic Cartier watches will also almost always feature a 4-digit model number. Using the 4-digit number, one can do further research via Google and find the ever elusive “W” number, which is Cartier’s actual reference number. Counterfeiters usually miss this. 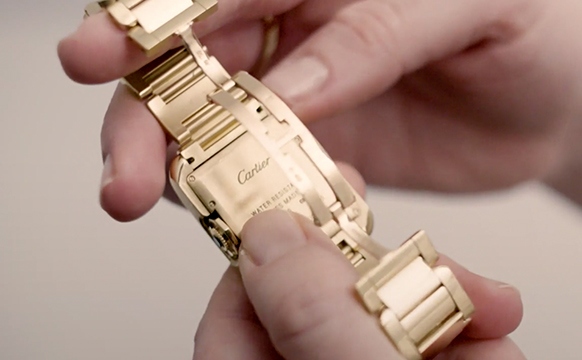 Another detail to look out for are the screws used for the caseback and bracelet. Generally speaking, fine Swiss watch companies use flat-head screws, and the knockoffs we see come from Asian manufacturers almost always come with Phillips head screws. I recently saw a fake “Ballon Bleu” come in that had a snap-back case that the illegitimate manufacturer had actually engraved screw heads onto — from a distance, it looked like it had the correct flat-head screws, but up close, you could see it was just engraving.

We also check for the quality of engraving. Any engraving on the caseback or clasp should be deep, crisp, clear and neatly laid out, as well as actually engraved with a cutting tool. It’s a sign of a fake if the engraving is pixelated under high magnification. Fakers frequently use laser engraving, which leaves a grainy, sloppy finish. Markings denoting material type may also be featured on the clasp.

What are the major differences among Cartier’s Tank styles? 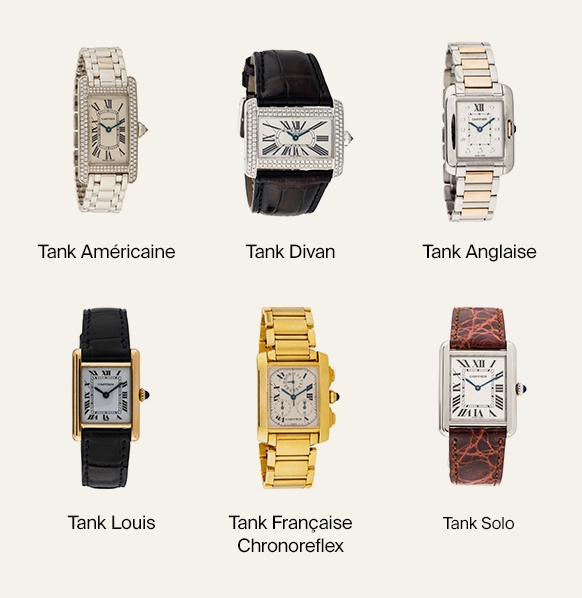 The differences in Tank styles have to do with overall case shape, and the way the lugs are shaped. The Américaine is elongated, while the Divan is shorter and elongated horizontally. The Anglaise will have a guard over the crown. The Louis is also rectangular but the tips of the lugs are rounded, and the crown cabochon is usually more pointed. Chronoreflex versions of the Tank will feature a chronograph complication. Finally, the Tank Solo looks a lot like the Louis but has a flattened profile, not rounded. And the traditional Française is more of a traditional rectangular shape, but the lugs are sloped at an angle.

What distinguishes Cartier from other watchmakers?
Overall, Cartier is a very jewelry-oriented company, since so much of what they manufacture is fine jewelry, and that shows in their watch lines. They’ve branched out from fine jewelry into other luxury areas over the years, but their goal has always been to create classic designs that will last beyond the fashion trend of the moment. They’ve succeeded beautifully with their Tank watch line.

Now that you can spot a real Cartier Tank watch, invest in your own now. Should You Sell, Trade Or Consign Your Watch? An Expert Guide The Cartier Love Bracelet: A History & How To Spot The Real Thing How To Spot A Real Breitling Watch